A Trail to Osteen and the Ethiopian Eunuch 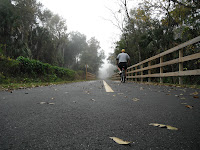 It was a foggy start on the East Central Rail Trail that began at Green Springs in Volusia County and ended in Osteen.

I thought I was out for a day of exercise and site seeing, but it soon appeared I had an appointment with a man in Osteen. I keep a pocket full of pennies stamped with the Ten Commandments, just in case.

The trail from Green Springs to Osteen is just 5.7 miles, but that is just one way. I packed some trail mix, cashews and Gatorade for fuel. The trail ends at a roadside store, so I wasn't worried if I gobbled up everything just getting there.

My mother was born east of Osteen at her family's home off Maytown Road in Farmton. Dad would take us to Cow Creek to fish while Mom fried chicken on the bank. On afternoon trips to fish we always stopped at that store in Osteen. The sugar coated Ginger Bread Man was always my favorite. It's only a shell of the store it was then and as I reminisced with the new store owner, it was obvious he didn't speak English. He was staring at me like a calf looking at a new gate. "No speak English," he finally admitted.

Robert was gassing up his old pickup truck. He's done construction, a pool business and now clears land for a living. He said he was taking his equipment back to Charlotte because there just isn't enough work here now. He said he used to work at the Charlotte Motor Speedway, but it was also obvious he was originally from Syracuse, and not the South.

Finally, after a good conversation, I realized I would never see Robert again, so, I gave him one of my "pennies." He let me share with him the purpose of the penny with the Ten Commandments stamped on it and acknowledged that he understood what I was saying. He had to leave, so I reminded him that there are lots of folks like me in Charlotte. He agreed as he laughed and walked in to pay his bill.

﻿﻿﻿
I decided I would take some pictures before heading back. I like to show people a picture of the old post office and tell them that this is downtown Osteen. There is a hole in the back door and you can see a box with cubby holes where they sorted the mail. There's an old organ, too. Not sure if this was also used for a church.

﻿
As I was walking back to my bike, I smelled some sweet feed. One of the pleasures of owning a horse is opening up a new bag of sweet feed. It smells better than most of the honey-bunches-of-oats we get for breakfast. I walked into the Osteen Feed and Hay store to just to get a big whiff.

It reminded me of the day I was with the preacher in Knoxville, Tennessee. We parked in front of a warehouse and the sweet smell was so inviting. I went inside and saw bales of tobacco stacked every where. I put my nose on one and sucked in a room full of air. "Man, if they tasted as good as they smelled......" oh, yeah, I was with the preacher.


After looking at all the new tack and feeders I met Bryant Lee. Bryant was the only one working there that day and a real pleasure to talk to. He lived in Deltona and loved working at the feed store. We had a lot in common. Bryant said he grew up in church, his Uncle was a Bishop at a church. Sorry, the church's name was too long to remember. I said, "So, you guys are tambourine whackers!" He laughed, "Yep, we do that to." 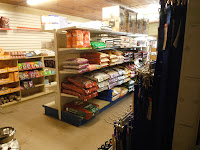 Bryant spoke fondly of church, so I asked him, "Sounds like you know you're going to heaven?" He said, "I sure hope to walk through those doors some day."

I asked him what he was basing his "hope" on. He told me how good he was and involved with the church growing up. Sounded a lot like my childhood, except for the "good" part.

I handed Bryant a Ten Commandment penny. Even as young as he was, it was difficult to figure out that the commandments were actually stamped on it. I told him that some people thank me, as if the penny was a good luck charm. But, it's actually written to show us we aren't good. We're all guilty of breaking God's law.

I asked Bryant if he ever "bore false witness," or told a lie. "Sure," he quickly admitted. "What does that make you," I said. "A liar," he agreed.

"Have you ever taken anything that didn't belong to you." "Hmmmmmm," he thought. "Come on now, you already told me you're a liar. Surely you've taken something, no matter how little, sometime in your life." "Yes," he said, "I'm a thief, too."

I told him that Jesus said if I look at someone with lust in my heart that I've committed adultery and if I hate my brother I'm the same as a murderer. That means that we are lying, thieving, adulterers and murderers. Besides, the Bible says if I broken one law, I'm guilty of them all.

"You see, Bryant, if I could ever be good enough, then why did Jesus suffer and die for my sins? The Bible says that the 'wages of sin is death, but the gift of God is eternal life through Jesus Christ.' Jesus already paid for my sins by His death when he said on the cross, 'It is finished.' All that needed to be done was done. Hell is for those who haven't put their trust in Christ and will pay with their death for eternity."

In 1 John it says that 'This is the record that God has given to us eternal life, and this life is in his Son." And, "I have written this to you who believe in the name of the Son of God, so that you may KNOW you have eternal life." (Not hope, so).

I said, "John 3:16 says..." and Bryant finished, "For God so love the world that he gave his one and only son, that whoever believes in Him should not perish, but have everlasting life."

That's right.... do you see it? The only thing you need to do to get to Heaven is "believe." Believe that you are guilty of sin, that Jesus, the Son of God, paid your sin debt, and receive it as a free gift. How do you do that? You tell God, "I believe that, I accept what Jesus has done for me."

I told Bryant, "Do you realize that I rode my bike more than ten miles to tell you this today?"

In the book of Acts a man named Philip ran into the desert outside of Jerusalem to tell a man on his way back to Ethiopia the same message. The Eunuch from Ethiopia was in charge of the treasury for the Queen. He was a convert to Judaism and returning home after observing all that had just happened in Jerusalem. Perhaps, even the crucifixion of Jesus.

He was riding in his chariot and reading from the book of Isaiah:

Philip asked, "Do you understand what your are reading?" The Eunuch replied, "How can I unless someone guide me?" And Philip explained to him that Isaiah was talking about Jesus, the Christ who has taken away the sins of the world.
﻿﻿

When they came to some water the Eunuch asked Philip, "What hinders me from being baptized," and Philip answered, "If you believe... you may."

I asked him to tell God this, "Dear God, I admit that I am a sinner. I believe Jesus died for me. Right here and right now, I put my trust in Him. Come into my heart, give me eternal life. Thank you in Jesus name, Amen."

I like it when folks get excited when they understand that they have eternal life. When they finally "know" that "God has given us his Spirit as proof that we live in him and he in us.... All who confess that Jesus is the Son of God have God living in them." Bryant said, "This has been a crazy day!"

Tell me about it. I have to ride all the way back. Philip just "appeared" back and preached his way to Caesarea!
Posted by George C. Markos at 8:33 AM

George C. Markos
I worked as a Risk/Safety Manager for a State College and a public - electric and water utilities company. I found the prevention side of disasters more effective than the emergency response side. I was a city Firefigher/EMT until returning to college at Tennessee Temple University where I worked on an Advance Life Support Unit until graduation. After five years at TVA's Browns Ferry Nuclear Plant (Captain of an Emergency Response Team), I moved back to Florida. I started back in outreach and church ministries here in Volusia County while working full-time. Telling others the good news of Jesus Christ is a 24/7 opportunity. Whether at work, church or just fishing, the world is hungry for some good news.